Protecting millions of people in Syria from leishmaniasis 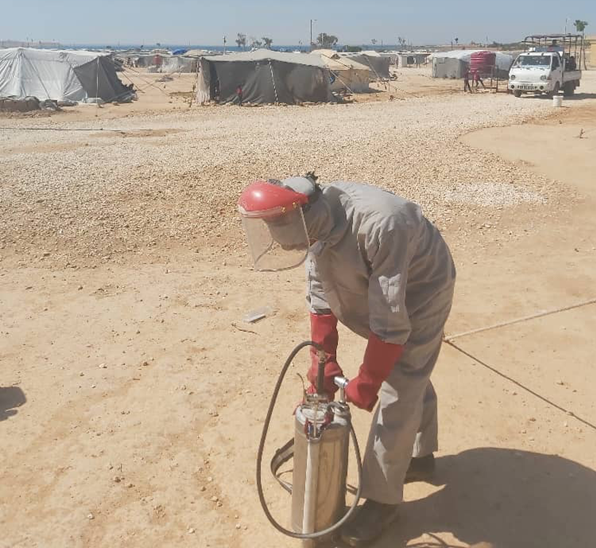 Teams sprayed 372,000 households in North-West and North-East Syria, to protect over 2 million people from this Neglected Tropical Disease (NTD) which is transmitted by sandflies.
Over 1 million people protected in this campaign are internally displaced, having fled here to escape the civil war. (1)

Spraying WHO-approved insecticide on inner walls of houses and shelters kills the sandflies that land there. This significantly decreases their population and subsequent cases of leishmaniasis during the high-transmission season (June to October).

Sandflies in this region transmit Cutaneous and Visceral leishmaniasis. Cutaneous leishmaniasis causes skin lesions, mainly ulcers, leaving life-long scars and serious disability or stigma. The visceral form of the disease affects the internal organs and is fatal if left untreated in over 95% of cases.

This is the eighth year of our large-scale IRS programme in Northern Syria, which reaches around 2 to 3.5 million people each year.

Controlling the spread of leishmaniasis in Northern Syria continues to be challenging. Localised outbreaks in underserved areas occurs several times a year – and crowded Internally Displaced Persons ( IDP) camps with poor sanitation make people more vulnerable to the disease. Annual droughts in some parts of the region have led to an increase in leishmaniasis in these areas.

The programme is funded by Bureau for Humanitarian Assistance (BHA) and the Syrian Cross-Border Humanitarian Fund; co-ordinated with partner organisations and local health and council authorities.

(1) There are 6.2 million people, including 2.5 million children, displaced within Syria, the biggest internally displaced population in the world. The pace of displacement remains relentless. Well over 1.8 million people have been displaced in 2017, many for the second or third time. (UNHCR)

International NGO working with the world's most vulnerable and hard to reach communities to reduce death and suffering from tropical diseases.

“The #UnitedStates hosted pledging conference for @GlobalFund raised more than $14.25 billion so far for the partnership’s work.”

Tuesday beauty/necessity: the work of @MENTOR_Hq. Thank you guys for the fantastic work your doing tackling #Leishmaniasis I’m in the most complicated situations and helping populations in need #StrongerTogether https://twitter.com/MENTOR_Hq/status/1572131415596191748

📢Read about The MENTOR Initiative's work over the past year, and meet some of the team who are delivering programmes that reach and protect vulnerable and hard to reach populations, in our latest annual report. http://bit.ly/3SeE9U2