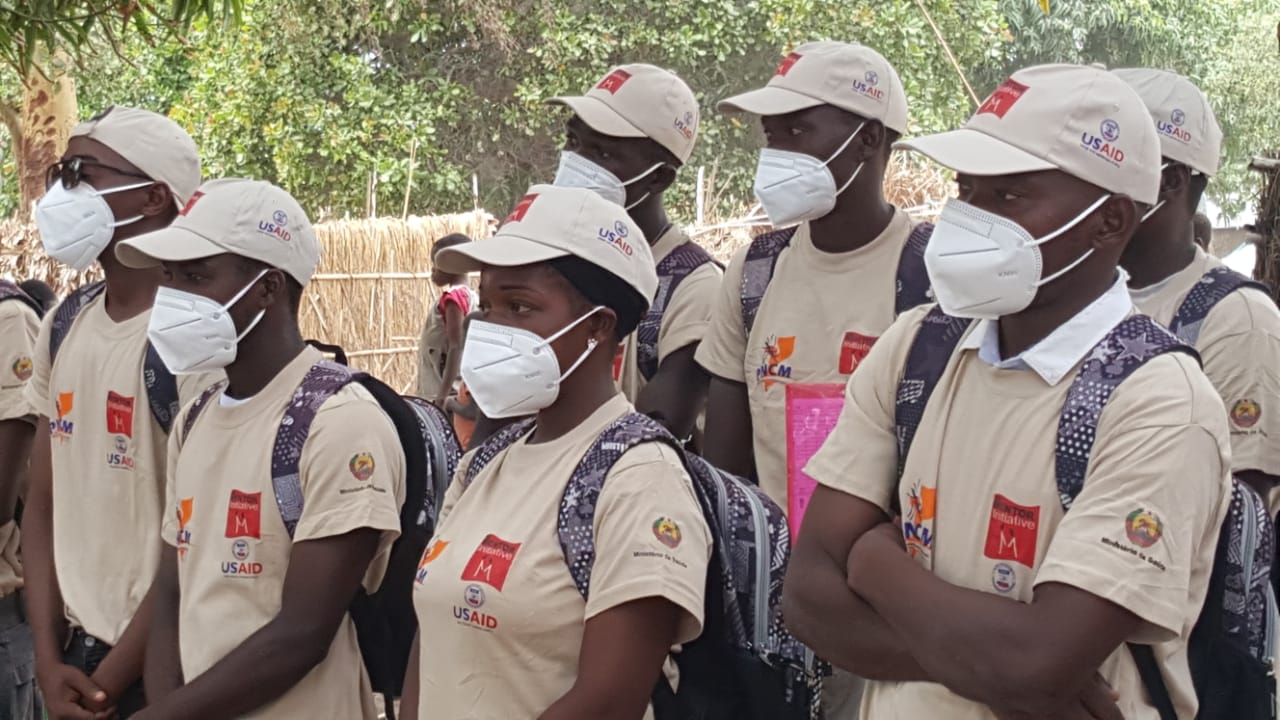 (13 July 2022) Work is underway in Cabo Delgado Province in the second phase of MENTOR’s response to the humanitarian emergency caused by violence and insecurity in Northern Mozambique.

The programme, which began in 2021 and is funded by BHA-USAID, aims to ensure access to life-saving disease prevention and health services to conflict and disaster-affected communities in 11 districts.

The MENTOR Initiative is supporting the Provincial Health Directorate (DPS) to train and supervise Community Health Workers (APEs) on malaria and other vector-borne diseases (VBD) management in all 11 districts.

We are also supporting the DPS to manage malaria and other VBD control through Indoor Residual Spraying (IRS) and hygiene promotion campaigns in Internal Displaced Persons (IDP) camps and surrounding communities in five districts.

This next phase started in March 2022 and will run for 12 months. Planning the IRS campaign scheduled for mid-September is taking place, which will reach almost 750,000 people – 383,818 of these are IDPs.

The main objective is to have a clear picture of needs in each district and calculate the number of insecticide, equipment and human resources needs for the campaign. The logistical aspect is crucial for the success of IRS campaigns on such a large-scale.

The situation in Cabo Delgado

The humanitarian situation in Cabo Delgado province continues to deteriorate rapidly due to insecurity and violence. In the past few weeks there have been new attacks in southern districts of the province that were considered safe. This involved a new mass movement of population of the districts of Ancuabe and Chiure to Pemba, Metuge, and other districts. More than 10,000 IDPs moved to Pemba during the last few weeks.

To respond to this sudden need in assistance for new IDPs we have added Pemba district to the hygiene promotion activities.

We will start the training of hygiene promotors in mid-July in Pemba and Metuge followed by Montepuez, Mueda, Ancuabe and Chiure the subsequent weeks.

Originating in the far north of the province, non-state armed opposition groups (AOGs) have spread their area of operation as far south as Chiure district; and recently as far west as Mueda causing an increasingly desperate humanitarian crisis in Cabo Delgado with almost half of its districts in conflict.

Since the conflict began, a total number of 1,090 violent events have been reported, causing 3,594 deaths. It is important to note that this is a rapidly unfolding crisis and Internal Displaced Persons (IDP) numbers are expected to be rising significantly, with OCHA providing figures over 660,000 in northern provinces. Of these IDPs, the largest proportion by far are children making up 59% of IDPs, and with women making up 19%.

IDPs in these conditions have either congregated in host communities, such as in Metuge, where they live in cramped conditions, or in makeshift and fast built IDP camps.

These populations remain highly vulnerable to communicable and vector-borne diseases such as malaria, dengue fever, chikungunya, and diarrheal diseases. These are exacerbated by a healthcare infrastructure that has been significantly damaged and disrupted by the conflict, all within the challenging context of the COVID-19 pandemic.

Malaria is the principal burden of disease in Cabo Delgado province, which has significantly worsened since the onset of conflict and the subsequent displacement it has caused. Crises settings such as this create perfect conditions for multiple parasitic, bacterial, and viral diseases to thrive and spread through an already traumatised and vulnerable population.

In settings where there are large influxes of IDPs, there is also a significant increase in both domestic waste as well as the likelihood of open defecation due to the increasing lack of sanitary facilities, such as latrines, in proportion to the rapidly increasing population.

Pathogens are transferred to whatever and where ever the flies come to rest when they are seeking food supplies, as they deposit faecal particles and the pathogens onto food supplies, plates, cutlery, cups, faces etc. As the fly population starts to increase, so will these instances of mechanical fly-borne transmission of diarrhoeal disease.

This is made worse by a recorded lack of handwashing points and soap provision in IDP camps, as 75% of sites in Cabo Delgado do not have access to soap. 50% of IDPs in Montepuez, Metuge and Mueda also live in sites with signs of open defecation6. A multitude of parasitic, bacterial and viral disease-causing organisms result in diarrhoea as a key symptom of infection. Fly-borne mechanical transmission has been well documented for 26 different pathogens, including cholera, and may constitute up to 26% of the overall disease transmission in crisis settings. The population most at risk of disease are those who have been displaced and are now in rapidly assembled camps and in host community populations.

International NGO working with the world's most vulnerable and hard to reach communities to reduce death and suffering from tropical diseases.

📰 KEY TAKEAWAYS FROM THE #WorldMalariaReport
Blog post: https://bit.ly/3VYtYVB
The @who just released the 2022 World Malaria Report. Check out our blog post for key takeaways!

In the annual World Malaria Report, the @WHO warned that the arrival of the Anopheles stephensi in at least 5 African countries is a “threat to malaria control and elimination” – esp if the insect gains a foothold in the rapidly urbanising megacities https://www.telegraph.co.uk/global-health/science-and-disease/super-mosquito-invasion-could-trigger-malaria-surge-warns-who/